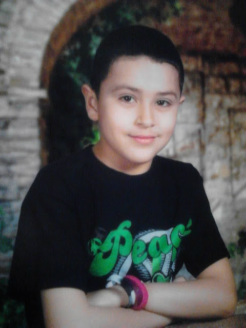 This is a photo of Dominick, a very remarkable child who volunteered his time and effort to help raise money for my medical expenses associated with chronic Lyme Disease and Lyme Disease awareness at the event I held in February which was sponsored by Fuzion Fitness. Dominick is an assistant to Joseph Romanoff who is a Licensed Zumba Instructor. I had purchased a Lyme Disease awareness t-shirt for Dominick in appreciation for all his hard work. He chose to wear his Lyme awareness shirt for his school picture despite being told by his school that the school thought it was inappropriate for a school photo. Even though Dominick is only 9 years old, he stands up for what he feels is right and what he believes in. I am so proud of him and I hope other children will learn about Lyme Disease because of Dominick and this will in turn save many lives. Way to go Dominick!! Written by, Teri Birch