Time to Recognise Lyme Clock, Australia. Presented to the Senate Inquiry Committee at the Brisbane Hearing on April 15th 2016

On behalf of Lyme Australia Recognition & Awareness and Global Lyme & Invisible Illness Organisation Karen Smith (Co-founder of GLiIO) was allocated 45minutes to speak / present at the Senate Inquiry hearing in Brisbane on the 15th of April.

At the end of Karen’s opening statement to the Senate Committee with regards to the clock presentation Karen noted: "To close Lyme Australia Recognition & Awareness (LARA) and Global Lyme & Invisible Illness Organisations (GLiIO's) allocated session today, Matt Chant will finish with a presentation on behalf of all those who have lost loved ones, and all those who are living with Lyme & Co.,  The Time to Recognise Lyme’ Clock project aims to show the human side of this disease and the devastation its denial and lack of treatment and medical care is creating". (A link to the submission from LARA/GLiIO will be provided in the very near future)

Matt opened the Clock Presentation with: "The Time to Recognise Lyme Clock is a call to Action, to show that acknowledgement and treatment can help restore Hope and Health, and that the denial of Lyme and other Vector borne diseases in Australia is causing devastation and the loss of years of people’s lives, and in far too many instances, their death".
Audio of the Clock introduction / presentation :
Call to Action: Acknowledgement & Treatment Can Restore Hope & Health

With a diagnosis, people can begin to understand their illness, know what to treat, and start to regain their health.
Sarah Knights: Victoria: Age: 23. Sick since the age of 12. Since 2005 Sarah’s health has been up and down.. A severe downturn in 2014 saw her lose the use of her legs. Doctors had no idea what was wrong and she was told to ‘get used to life in a wheelchair’. Sarah was diagnosed with Lyme & Co. early in 2015 and she is slowly regaining the use of her legs.

Some words from Sarah that echo the sentiments of those living with Lyme & Co:
My life has been turned upside down; there isn’t a single aspect that has remained untouched. My independence, finances, freedom, friendships, career just to name a few. Since the age of twelve everything has been dictated by illness despite best attempts to stop it. I have been accused of putting it on, or making it up but what no one does see is the many tears that have been shed as I watch my life go by sitting on the sidelines, wishing for the day I can participate again and be a normal 23 year old.

So many who are sick are left searching for answers, for professionals who will help while being subject to bullying that in other aspects of life would be deemed unacceptable. Many others with a similar health status yet a different diagnosis would receive the support and resources required to make the journey as easy as possible. My family has all experienced the emotional and physical tolls, the sacrifices they have made just to give me the opportunity to fight. All this due to an illness that is a mystery to many, the psychological impact of which is now becoming just as debilitating as the illness itself. My question is that if this is not a Lyme like illness then there is something that is making so many sick, what is it?
Wheelchair (Picture on Left) : MAY 2014  "I hadn’t left my hospital bed for a month, hadn’t been outside ..It may not seem like a long time however when you’re trapped in a bed unable to get out yourself, looking at the same four walls it feels like forever.  The smile on my face was because I was finally getting a few minutes of fresh air when slowly wheeled to the hospital courtyard. Despite being in and out of hospital with illness for almost 9 years, it was from this moment on that the little things meant so much more than I ever imagined possible".
Standing (Picture on Right) : APRIL 2015 After travelling to Germany for Lyme & Co treatment - "First photo taken standing solo - May have been wobbly and I toppled backwards into the wheelchair after but its a start."

Sarah still has a long way to go to fully restore her health, but that opportunity is now there: made possible with a diagnosis and knowing what to treat.
Before More Lives Are Devastated By Illness

If Lyme & Co were recognised, the infection could be treated early, and people would not have to lose years of their life to illness, progressively getting more and more unwell.
Janine’s recount of her experience in reaching a diagnosis is sadly echoed by very many including Dave and Amara. 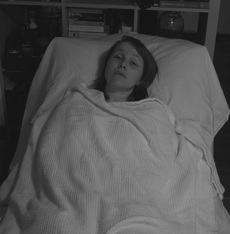 Amara has been sick for 15 years. She was initially diagnosed with ME/CFS in 2001 and by 2010 her health had deteriorated dramatically and she has been housebound ever since. Amara was diagnosed with Lyme & Co. 2013.  If awareness and early diagnosis were available, the odds are, Amara’s health would not have had the chance to deteriorate so badly. She may even have achieved her dream of becoming a mum, and she certainly would not have lost so many years of her life due to illness.

More of Amara's story will be updated on the website in the near future. You can also read her blog "Life Like This"
Or Lost Forever
Stand With Us

Help raise our voices to levels they cant ignore!

"Help us bring invisible into the light
So that no others have to suffer and fight
Tell our stories, believe our plight
Stand up with us and say, enough of the suffering - this just isn’t right"
*Links to more in depth personal stories of all those featured above (and other Australians) will be added to this page as they are added to the website.